Individual Psychology, or, in German, Individualpsychologie, a therapeutic approach developed by the physician Alfred Adler (1870-1937), is rooted in psychoanalysis. However, it can be distinguished from classical Freudian psychoanalysis on account of various particular aspects of the model. Adler was the first to emphasize how children, especially during infancy, feel a great sense of inadequacy, consequently manifesting a great need for care and attention. This is the situation which Adler deliberately defines as a feeling of inferiority, a term adopted by the Austrian physician to indicate the physiological and common condition of inadequacy and insecurity presented by a young child in relation to a still unknown and unexplored outer world filled with beings that are bigger, stronger and more capable than he is.
If the support and care provided by the child’s early social environment are favourable, the child will subsequently gradually overcome the problem and the distress caused by its inferiority as it grows physically and psychologically, will initiate the various learning processes of childhood and slowly consolidate its social integration, initially experienced within the family circle and later on outside of the home. If, on the contrary, early stimuli are negative or perceived as such, it is likely that the ordinary sense of inferiority will be reinforced as a consequence to such an extent that it will result in the subject gradually succumbing to the fate of the establishment of an inferiority complex, which is always a pathological condition. According to Adler, it is not possible to study a human being 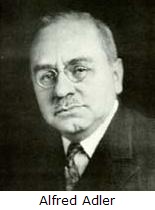 in a condition of social isolation as we are all part of a social context. This very point distinguishes Adler’s Individual Psychology from Freud’s Psychoanalysis as, with the exception of the relationships that develop with one’s parents or early caregivers, in the classical Freudian approach social relations are neglected. For Adler, social interaction has a fundamental importance and should be taken into account as an essential constituent of the psychic makeup of an individual. With the term ‘individual’, reference is made to the concept of a unique and unrepeatable psychic individuality, which, through the necessity to ensure one’s survival, must become a part of a community structure formed by other psychic units, which are also unique and unrepeatable. The two components Adler recognised as being fundamental - the ‘will to power’ and the development of social feeling –ensure the survival of human beings. These unavoidable instruments of growth are both situated beyond the basic drives and in each individual  have the specific task of regulating instinctual impulses and conscious activity.

For its own part - and with the energetic thrust by which it is characterised - the ‘will to power’ drives human beings in the direction of individual goals of self-affirmation, together with the other fundamental human need: social feeling. It is represented by the need which every human being has to cooperate with others and to jointly share in their emotions. The field of action of the will to power extends to all sectors of social interaction, from feelings to sexuality, work and interpersonal relationships, while, for the purpose of attaining power and dominion and achieving self-conservation, its actual operative intervention - without possessing within itself an aggressive foundation - uses what Adler defines as the aggressive drive. In Adler’s view, in very small children, aggressiveness is nothing else than a primordial energy: not yet curbed and channelled, but already capable of ensuring satisfaction of an individual’s most elementary needs.

Along the way, however, the first obstacles begin to loom on the horizon, the child experiences its first moments of sufferance and new dangers indicate the confines within which it may express its vital energy, modulating the intensity of this energy in accordance with contingent necessity. Later on, when it has grown a little, it will necessarily have to contend with the rules of social life, initially expounded by the mother, but subsequently indicated by the family unit and later on by society itself. Many of these rules concern the control of one’s aggressiveness, which will thus be channelled towards permitted, solicited or even imposed areas of activity and expression. The originality of Adler’s thinking lies in his having emphasized the finalistic view of the individual’s success in overcoming his/her feelings of inferiority (whatever sense ‘inferiority’ may have in the psychological ‘arrangements’ of the individual).

The will to power, in its irresistible drive towards the fulfilment of goals, will not tolerate a state of inferiority and uses all of its energy to overcome such a condition. An individual’s efforts to emerge and impose his/her will is the attempt to overcome the inferiority complex, which he/she experienced, as a child, with respect to the world of adults: an inferiority which can be made more acute by economic and organic factors. In an attempt to overcome a sense of inferiority, the child sets self-fabricated aims for itself, which have the purpose of tranquillizing it.A form of mediation occurs to alleviate the contradiction between a factitious vision of life and actual reality in normal subjects, allowing them to establish satisfactory social relations. In neurotics, the mediation process fails, to the detriment of any possibility there may be of enjoying positive social relations. Therapy thus aims at determining how this self-delusion came about, by the analysis of memories and dreams. It does not use the free-association technique, considers transference as a facilitating dynamic and implies active participation on the part of the therapist aimed at exposing the false objectives the patient is seeking to attain and proposing more suitable and stimulating existential goals.